THE FILE ON THE TSAR 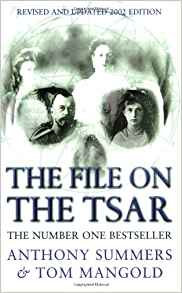 About the book “The file on the Tsar”
The fate of Nicholas II, Alexandra and their five children is one of the greatest mysteries of contemporary history. Were the Tsar and his family really killed in Yekaterinburg on the night of July 16, 1918?
Anthony Summers and Tom Mangold did a wonderful research in different parts of the world, which took them more than four years.
They spoke with members of the Imperial Family in exile and with people who knew the Romanovs in one way or another. They listened to historians, doctors and many other specialists and have examined a huge body of documents, including the seven volumes of the expert who served as the basis for his report to Sokolov the “Official Investigator of Cases of Special Importance.” The result of all this was a book full of revelations. We discover the harsh attitude demonstrated by King George V and Kaiser William II. The book again raised the controversy surrounding the woman who claimed to be Grand Duchess Anastasia, sole survivor – as she said and proclaims herself – of the Russian Imperial Family; This fascinating book proves that official investigators concealed convincing evidence of the survival of the Tsar’s family; and, above all, it highlights facts that clearly show that the majority of the members of the Romanov family were not murdered at Ipatiev’s house in Yekaterinburg and were still alive after July 1918. A long note concerning the intervention of the Spanish monarchy in favor of the liberation of the tsar, was written expressly by the authors for this edition only published in 1978.
“The file on the Tsar” is undoubtedly – and this is what international criticism has considered it – a world news story in the form of a book. A perfectly documented, meticulous and convincing book, which sheds little light on the drama of Yekaterinburg and on the fate of some protagonists on which so much has been written so far, and not always with true knowledge of the case and, almost always, without the correct documentation.